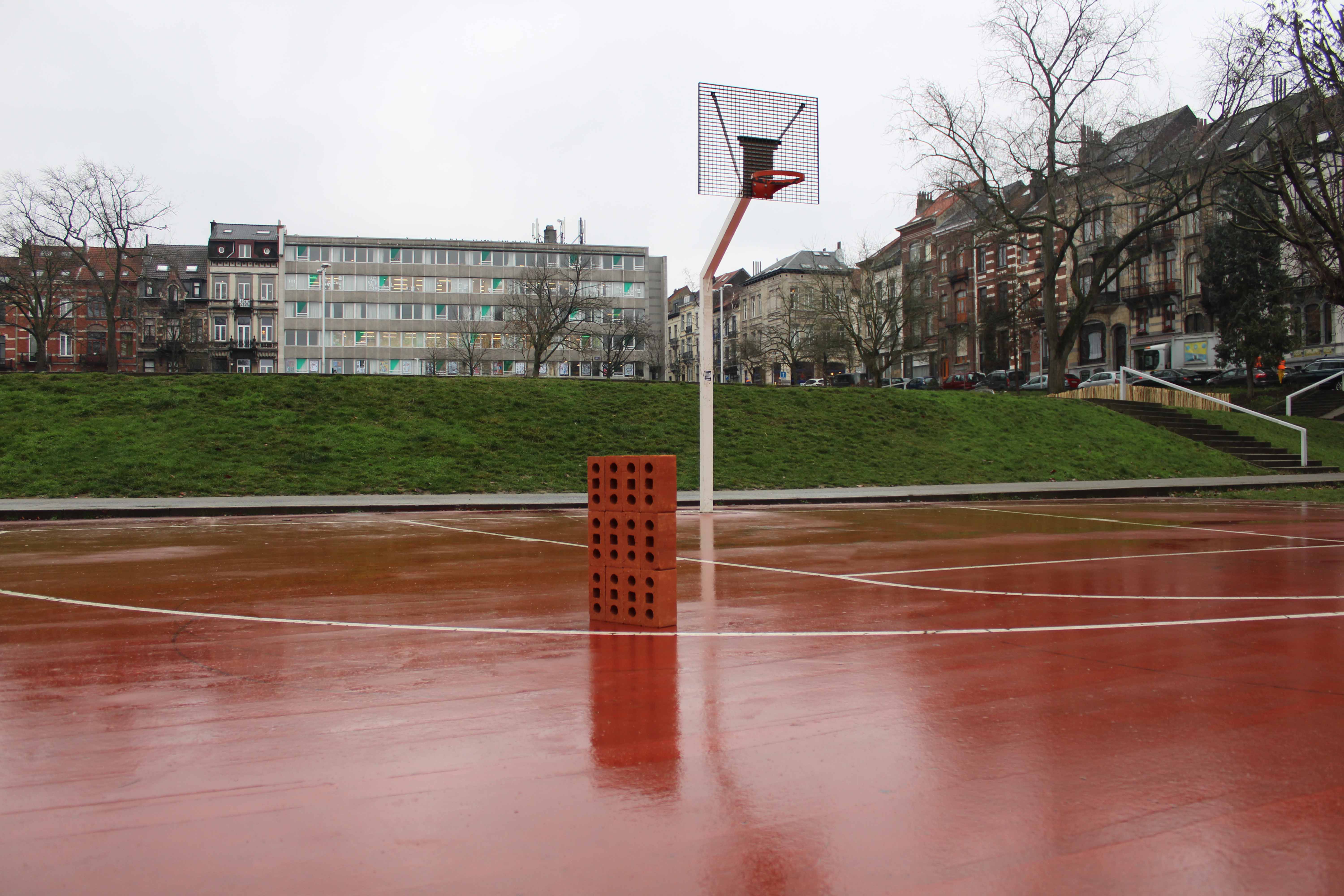 The artwork of the artist Muhammad Al-Ani simulates or talks about human reality with a simple presentation that is far from complex or visual dazzling, but rather presents his idea in a way that came from deep thinking and many experiences until it became in this way, as it is full of deep philosophical ideas and visions that need to be meditated in order to open the locks of this simple and full form With a different vision. The geometric shape consisting of tiles was placed in a basketball court located in a modern city. The players should witness the presence and vitality of the place by the players as well as the movement of pedestrians and cars, but the situation indicates complete calm and the place being abandoned by what happened to the city of Chernobyl by a nuclear disaster, it is a depiction of a situation Anxiety and fear of an invisible enemy that cannot be felt or expected has swept the world silently and calmly, despite the pride of an elite group of countries in the world of the scientific progress that it has reached today of great achievements, but it collapsed by the action of an object that cannot be seen with the naked eye, so these achievements have become merely a profitable commercial marketing for daily consumption or use. The personal relies on visual and sensory stimulation for the purpose of marketing it, and the consequences of the disaster that brought the global economy to the arrival of major companies on the brink of bankruptcy and collapse and Consequently, threatening people’s lives by losing their jobs, i.e. their source of livelihood, and loss means misery and misery, and thus leads to the need that Victor Hugo warned about in his novel, The Misers. The loss of the presence of people leads to the cessation of life, as the artist cannot produce a work of art without watching it, and the business owners from the big to the simple will lose their daily source of strength. There is a code sent by Muhammad Al-Ani through this shape, which resembles an apartment building devoid of any life or suggestion of a human presence, as it is like a foundation stone or a monument to the horror that struck European cities. For this epidemic, and the most strange one, that each of Europe and America from the most continents of this dreaded epidemic reaped a lot of people’s lives more than the countries of the third world, is this not surprising compared with the capabilities of the third world countries. During World War II to the Middle East, will Europeans resort again to countries less affected by the epidemic? The depiction of Elias and Raib by Muhammad Al-Ani reminds us of the works of the artist Giorgio de Chirico, which is dominated by anticipation, anxiety and depression. Fear and its object depict a state of mental disorientation and intellectual disorder. And also the work reminds us of the Robk’s cube and the world being a strange riddle that cannot be understood and that it is linked to some kind of spells and hidden powers that shape it according to what you want or as a supernatural game that changes if someone tries to play or tamper with it as portrayed to us. Jumanji movie about a game that has the role of causing coups and change Reality, although it is a game that no one can expect to be triggered by a mere game in the life of everyone who plays with it, as well as a reference to the mythical thinking of previous civilizations and peoples that explain the phenomena that they cannot explain are due to metaphysical forces. Amidst the unknown, the brick is a symbol of construction and progress, and its discovery is a revolution in the world of human knowledge in the field of architecture, which was discovered eight thousand years ago in Mesopotamia, and here is the tile waiting for someone to turn it into an urban achievement or a scientific solution to the epidemic. Can the world overcome this ordeal with the least losses? And the work refers us to the play waiting for godot by the Irish writer beckett, so does the godot come, or whoever comes to save the world, or do we remain confined to wishes and daydreams. Muhammad al-Ani referred to the tombstone of all the dreams and aspirations of the man who planned for it during the past years, and it came to disappear and buried before seeing The light, or that it has aged and is no longer valid or suitable for this time, must be reconsidered in a new way that is appropriate for the present. Likewise, the work is like a spell made by the shaman to ward off evil spirits from the city, as primitive peoples do. Acting as a key introduces the recipient to worlds and ideas that he tries to escape from or makes him confront, as he sees all his fears, doubts, and faith in this world and the feasibility of a person’s ability to overcome his misfortunes in which he lives, or that he lives in a nightmare or sees an exaggerated advertising material. And from the above, the artist has succeeded. Muhammad Al-Ani excited the recipient by using a simple, traded material, from which he made an artistic effect full of aesthetic creative energies, so it was a thoughtful and elaborate creativity.